The winter of 1946–1947 was a harsh European winter noted for its effects in the United Kingdom. The UK experienced several cold spells, beginning on 21 January 1947, bringing large drifts of snow to the country, which blocked roads and railways. Coal supplies, already low following the Second World War, struggled to get through to power stations and many stations were forced to shut down for lack of fuel. The government introduced several measures to cut power consumption, including restricting domestic electricity to 19 hours per day and cutting industrial supplies completely. In addition, radio broadcasts were limited, television services were suspended, some magazines were ordered to stop being published and newspapers were cut in size. These measures badly affected public morale and turned the Minister of Fuel and Power, Emanuel Shinwell, into a scapegoat; he received death threats and had to be placed under police guard. Towards the end of February there were also fears of a food shortage as supplies were cut off and vegetables frozen into the ground.

Mid-March brought warmer air to the country which thawed the snow lying on the ground. This snowmelt ran off the frozen ground straight into rivers and caused widespread flooding. More than 100,000 properties were affected and the Army and foreign aid agencies were forced to provide humanitarian aid. With the cold weather over and the ground thawing there were no further weather problems. The winter had severe effects on British industries with around 10% of the year’s industrial production lost, cereal and potato crops down 10 to 20% and a quarter of sheep stocks lost. The ruling Labour Party began to lose popularity, which led to them losing many seats to the Conservative Party in the 1950 election. That winter is also cited as a factor in the devaluation of the pound from $4.03 to $2.80, Britain’s decline from superpower status and the introduction of the Marshall Plan to aid war-torn Europe. The effects on the rest of Europe were also severe with 150 deaths from cold and famine in Berlin, civil disorder in the Netherlands and business closures in the Republic of Ireland. 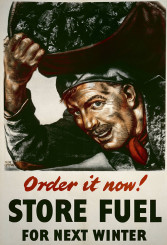