Pollock is celebrated as an “action painter”, and his fame, as de Kooning said, blazed a trail for American artists – yet Pollock’s style is in fact classically ordered, a vision of nature (he painted most successfully in rural Long Island) in which he insisted there is “no chaos, dammit!”

The chaos is in de Kooning. Born in Rotterdam and arriving illegally in the US in 1926, de Kooning was a caustic, gritty, dirty-minded painter. His paintings exist on a colossal scale, even though, in contrast to Pollock or Rothko, they are recognisable as traditional European-style pictures. De Kooning’s canvases feel as if they were made with a giant hand, yet the wide smears of paint are unexpectedly delicate, the colours pink and aquamarine. He was the greatest colourist since Matisse.

De Kooning’s mentor in New York was the Armenian immigrant artist Arshile Gorky; classic de Kooning abstractions such as Attic (1949) suggest forms being crushed, chopped, hammered into the flat world of the painting, taking Gorky’s ideas and making them harsher.
Subject: De Kooning described the figurative motif of this painting not as a representation but as a thing slapped on the canvas, liberating him from formal anxieties. Woman I “did one thing for me: it eliminated composition, arrangement, relationships, light, because that [motif] was the one thing I wanted to get hold of. I thought I might as well stick to the idea that it’s got two eyes, a nose and mouth and neck.”

Distinguishing features: Eyes as big as grenades, teeth grinning violently, huge limbs, mountainous breasts – this “woman” is exaggerated, absurdly physical and at the same time, not there at all, a spewed atrocity of nature in. fantasy, a crude graffito that took two anguished years to paint. Pink legs stick out of a red and yellow white-flecked inferno of skirt, the white clouds of the bosom float in de Kooning’s mind as apocalyptically remote as the bride that hangs above the bachelors in Duchamp’s Large Glass.

This is a ballad of sexual frustration. If you had to visualise de Kooning’s relationship to the woman, you would picture him trying to make polite conversation, or ignoring her sitting across from him on the subway, while desire pounded his brain.

It is a darkly comical painting, in contrast to the tragic vision of a Rothko or late Pollock, but it would be missing the point to see it as “figurative” in the British sense; on the contrary, it opens up new areas of erotic, everyday life to abstract art. Compare it with Bacon or Freud and you see how remote this painting is from the melancholy of traditional figuration. There is no body. The woman is a woman in the painter’s mind – an exuberated manifestation of colour and brushwork, with the splattered, pushed, released paint telling us unequivocally that it is a furiously sexual vision.

Inspirations and influences: Despite the fierce heterosexuality of Woman I , the artists who first followed de Kooning into this new space between abstraction and the real world dealt in sexual ambiguity – Rauschenberg’s Combines with their louche brushwork and dangled images and Twombly’s savagely eroticised paintings such as Bay of Naples (1961). Closer in spirit to de Kooning’s lusty cartoon are Oldenburg’s fantasies of mass-produced consumables inflated, sexualised. The giant lipstick he mounted on caterpillar tracks might belong to de Kooning’s Woman which hangs in the Museum of Modern Art, New York. 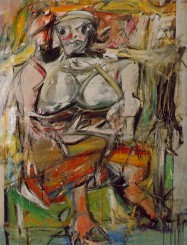