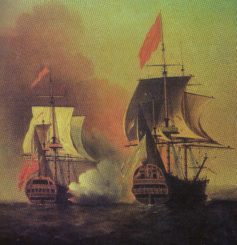 Spanish authorities began boarding and seizing British ships, as well as holding and torturing their crews. This led to an increase in tensions and an up swell of anti-Spanish sentiment in Britain. Though wishing to avoid war, First Minister Sir Robert Walpole was pressured into sending additional troops to Gibraltar and dispatching a fleet to the West Indies. – See more at: https://www.historiatimelines.com/the-war-of-jenkins-ear-1740-1750