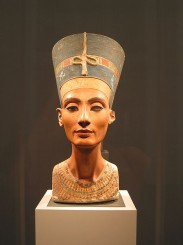 Nefertiti is known for her elegant beauty. Her bust has been the focus for numerous cosmetic lines. Many societies around the world have utilised the queen as a symbol of true beauty. Some historians have even proclaimed her the most beautiful woman in the world, although admirers of Helen of Troy may have something to say about that.

She ruled alongside Akhenaten during the eighteenth dynasty (1550-1292 BC). Nefertiti means, “The beautiful one has arrived.” She lived in Tell El Amarna, a city constructed by the pharaoh to worship their god Aten. It’s likely that Nefertiti was a distant relative to Akhenaten and a favorite queen to the pharaoh. Nothing is known about the queen’s childhood and no evidence has yielded who her parents are. Some believe her father could be Aye due to inscriptions found inside his tomb proclaiming him the father of her sister Mutnodjmet.

During her reign as queen, Egypt went through many radical religious changes. Hundreds of years of culture and worship usurped by a new radical concept — Monotheism.

The old gods were disregarded, temples shut down, and priests forced to change their ways. Many historians believe this transition could have been hostile and was not adopted easily by the citizens or priests.

Nefertiti’s reign with Akhenaten was unlike the traditional monarchy that Egypt had seen. She was more than a silent, subservient queen and instead, propagated Akhenaten’s views with vigour. Her reign was only 12 years, but she was perhaps one of the most powerful queens ever to rule. Supporting her husbands’ beliefs she changed her name to Neferneferuaten-Nefertiti meaning, “The Aten is radiant of radiance [because] the beautiful one has come.” Her importance was greatly valued by Akhenaten and he went to great lengths to show her as his ally in power. As queen, she took on powerful roles and showed herself in ways only Egyptian kings did. For example, she was often shown with the crown of a pharaoh or was depicted in scenes of battle smiting her enemies. Akhenaten valued her so much, that he also allowed her to practice that art of priesthood and she too was allowed to make offerings to Aten. Many Egyptologists believe that perhaps Akhenaten was born with deformities that hindered his role as king. One of the ailments that was believed he had was bad vision. This illness could have made his job difficult, in turn, he could have put trust into Nefertiti allowing her to decide many important matters. He trusted her so much, that he went as far as placing her name next to his in his royal cartouche. This was very unique and could have symbolized her as equal status next to Akhenaten.

Other depictions show the couple side by side often with their children in a utopic fashion. In one stela, found in Tell el Amarna, the couple is seated together. Akhenaten is giving his daughter an earring while his wife Nefertiti has the other two daughters on her lap. In this depiction, the queen is having a wonderful time and is shown in a loving manner with her husband and children. Both are shown as equal counterparts in their status and family affairs.