Hitler considered the Channel Islands – Jersey, Guernsey, Alderney, Sark and Herm – a valuable landing stage for the invasion of mainland France, as they sat just 20 miles off the French coast. Winston Churchill, however, thought they held no strategic importance for Britain and decided to de-militarise them and leave them undefended.

As the German army stormed through France in June 1940, some 30,000 Channel Islanders (one third of the total population) were evacuated. Once the initial panic was over, the rest decided to stay and tough it out, mainly on Jersey and Guernsey.

The following day, a detachment of troops arrived on Guernsey and that afternoon the German flag was raised. More arrived later and their attention turned to the other islands.

Jersey surrendered on 1 July and soldiers were swftly stationed. Islanders had to show their compliance by flying white flags over their houses.

Sybil Hathaway, the Dame of Sark, received German officers on 2 July. They assured her she had nothing to fear and the island’s garrison of just ten men arrived on 4 July.

Alderney, meanwhile, was almost completely empty, but was garrisoned by a company of troops. Herm, the smallest of the islands, was visited by German soldiers on 25 July, although they did not set up a permanent station there.

A curfew was imposed between the hours of 11pm and 5am and ID cards had to be carried. The sale of spirits was banned. Later, wirelesses were banned and all British-born Islanders were deported to Germany.

A register of Jewish people was created and all Jewish business had to publicly identify themselves. Some were deported to concentration camps. Cars were requisitioned and the Germans controlled the food grown by farmers and caught by fishermen. Anyone caught trying to escape to Britain was imprisoned or shot – if they didn’t drown.

Four concentration camps were built on Alderney – the only ones on British territory. Alderney became the most heavily fortified of the islands, built by slave labour.

Whilst there was no consolidated resistance movement as there was in France, V for Victory signs were painted around the islands, underground newsletters were written, and guns and ammunition were stolen from German stores. Some Islanders assisted their Jewish neighbours and fed slave labourers. On Jersey, letters sent to the Commandant by informants were intercepted by the Post Office and destroyed. Many who did collaborate were attacked after liberation.

The beginning of the end

The D-Day landings in June 1944 came as both a blessing and a curse. Whilst they marked the beginning of the end for the German occupiers who relied on supply lines from the continent, they also meant that food lines were cut. As supplies dwindled, everyone began to starve. However, after negotiation with the Home Office, the Germans allowed the Red Cross’ SS Vega to deliver food, saving many of the Islanders’ lives. The Vega continued to bring food parcels even after the British liberated the islands on 9 May 1945. 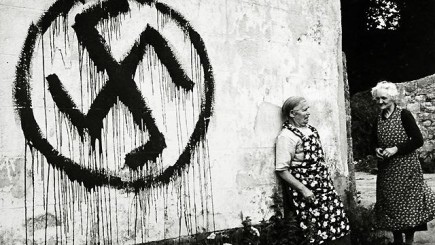 The Battle of River Plate took place on December 13th 1939. The battle in the South Atlantic was the first major naval battle of World War Two. Ships from the Royal Navy’s South American Division took on the might of Germany’s Graf Spee which was successfully attacking merchant shipping in the South Atlantic.

Harwood knew that the Graf Spee was in the South Atlantic somewhere but he had received no intelligence since November 15th as to her exact position. Harwood came to two conclusions:

There were three neutral countries in South America that allowed ships to use their harbour facilities – Argentina, Brazil and Uruguay. Under international law, a naval ship could only use a harbour once every three months. However, Harwood had built up a number of contacts in each country and this ‘law’ was given a liberal interpretation by both parties.

On December 2nd, 1939, Harwood received a message that a merchant ship, the ‘Doric Star’ had been attacked by a large German naval vessel just off St. Helena. The next day, Harwood was informed that another ship, the ‘Tairoa’, had also been attacked 170 miles to the south-west of where the ‘Doric Star’ had been attacked. Harwood assumed that it was the ‘Graf Spee’. By using the distance covered over 24 hours, Harwood estimated where this German naval ship could be. He worked off of an average speed of 15 knots an hour – in fact, the Graf Spee cruised at 22 knots; 50% faster than that estimated by the British. However, luck also assisted Harwood’s skill. The Graf Spee’s average speed was 22 knots – but it had been reduced as a result of the Graf Spee’s attacks on merchant shipping……to 15 knots, exactly what Harwood had calculated.

Harwood could not split his force of four cruisers so he decided that out of his two obvious choices, the River Plate in Argentina and Rio de Janeiro in Brazil, he would place his force at the mouth of the River Plate and wait. Even so, Harwood had to assume that the Graf Spee would go to South America – what if it turned to the West Indies?

On paper, four British cruisers against one German pocket-battleship would have been no contest. In fact, the Graf Spee was potentially an awesome opponent. The Treaty of Versailles had forbidden Germany from making what would have been considered to be classic battleships. To get round the restrictions of Versailles, Germany produced pocket battleships. The Graf Spee was commissioned in 1936. The Graf Spee was fast enough to outrun any battleship but was also armed with sufficient weapons to be a potent enemy. The Graf Spee had six 11 inch guns, numerous anti-aircraft guns and six 21 inch torpedo tubes at her stern. Her broadside range was 30,000 yards. She carried two Arado aircraft that could be launched by catapult. Her weaponry was superior to any carried by a British heavy cruiser and her armour, at 5.5 inches, was sufficient to resist shells up to 8 inches. Her eight diesel engines gave the ship 56,000 horsepower and a top speed of 26 knots. The engines also allowed the Graf Spee to travel 12,500 miles without refueling – near enough halfway round the world.

In the Battle of the River Plate, the Graf Spee was to be pitted against British cruisers. Though faster than the Graf Spee, they were all outgunned. The Exeter had six 8 inch guns, a top speed of 31 knots but her broadside range was 27,000 yards. Ajax, seen below, and Achilles had a smaller broadside range of 25,000 yards and were equipped with eight 6 inch guns.

On December 13th, 1939, the Graf Spee was targeting the route used by merchant ships near the River Plate in Argentina. Harwood had given the Ajax, Achilles and Exeter orders to engage the Graf Spee “at once by night or day” if the ships came across her.

At 05.52, look outs on the Graf Spee saw two tall masts on the horizon. By 06.00, Langsdorff had identified one of the ships seen as being the Exeter. He decided that the ships trailing the Graf Spee were protecting an important merchant convoy and he decided to attack. The engines of the Graf Spee were put onto a battle footing – their power was greatly increased. This gave out a plume of highly visible black smoke from the funnels of the Graf Spee and the following British cruisers could clearly see her position. The Graf Spee turned to attack and at 06.17 opened fire on the Exeter. The Exeter was hit amidships and the ship sustained damage. A salvo from the Graf Spee did a great deal of damage to the wheelhouse and killed all but three of the officers in it. The captain, Bell, survived and he ordered that the remaining turrets should fire on the Graf Spee. One salvo hit the Graf Spee near its turrets.

The Achilles and Ajax were also involved in this battle but they had stayed away from the Exeter in an attempt to split the Graf Spee’s fire power. It proved to be a successful ploy. More shells from the Graf Spee’s 11 inch guns hit the Exeter that continued to take massive damage. However, some of the Exeter’s torpedo tubes were undamaged and at 06.31, three torpedoes were fired at the Graf Spee from the Exeter. At that moment, Langsdorff had decided to turn and the three torpedoes missed. His attack on the Exeter continued and 11 inch shells hit the cruiser. However, the engine room was not damaged but electricity in the ship was lost and it was this that forced the Exeter out of the battle. Bell planned to ram the Graf Spee but he was ordered out of the battle by Harwood.

Now the Achilles and Ajax took up the battle. They were against a ship that had been hit but had suffered minimal damage at this stage even though Langsdorff had been knocked unconscious in one attack. Both ships were ordered by Harwood to approach the Graf Spee “at the utmost speed”.  Langsdorff, a torpedo specialist, kept both ships astern to give them the smallest possible target with regards to a torpedo attack.

What happened next is open to interpretation. Langsdorff went around the Graf Spee to assess the damage. He then told his navigator:

This decision, according to the Graf Spee’s gunnery officer was not well received. The ship had been hit by seventeen shells but junior officers of the Graf Spee later stated that the damage done to the ship was insufficient to cause it to run to a port. At this stage in the battle, the Graf Spee had suffered 37 dead and 57 wounded out of a total complement of 1,100. In comparison, the Exeter was three feet down in the waterline and had lost 61 men killed and could only use a ship’s compass for navigation with shouted orders to ensure that those orders were carried out. Harwood ordered her to return to the Falkland Islands.

All the indications pointed to the Graf Spee heading towards the River Plate and Montevideo. In fact the ship’s action report states clearly that it was the navigating officer that recommended Montevideo. Langsdorff sent a telegram to Berlin that stated:

Whether the Graf Spee was so badly damaged is open to question. The ship had been hit by seventeen shells but one gunnery officer recorded that three of these hits had simply bounced off of the armour and that the others had hit the ship “without causing damage”. The authorities in Uruguay, on inspecting the Graf Spee when it reached the River Plate, commented that the largest hit was six feet by six feet but was well above the waterline – as was all of the damage to the ship.

The Graf Spee made for the River Plate – the Plate estuary is a huge bay 120 miles across. The two remaining cruisers, Ajax and Achilles, patrolled the estuary to ensure that the Graf Spee could not slip out back into the Atlantic under the cover of dark. The crews later called this the ‘death watch’.